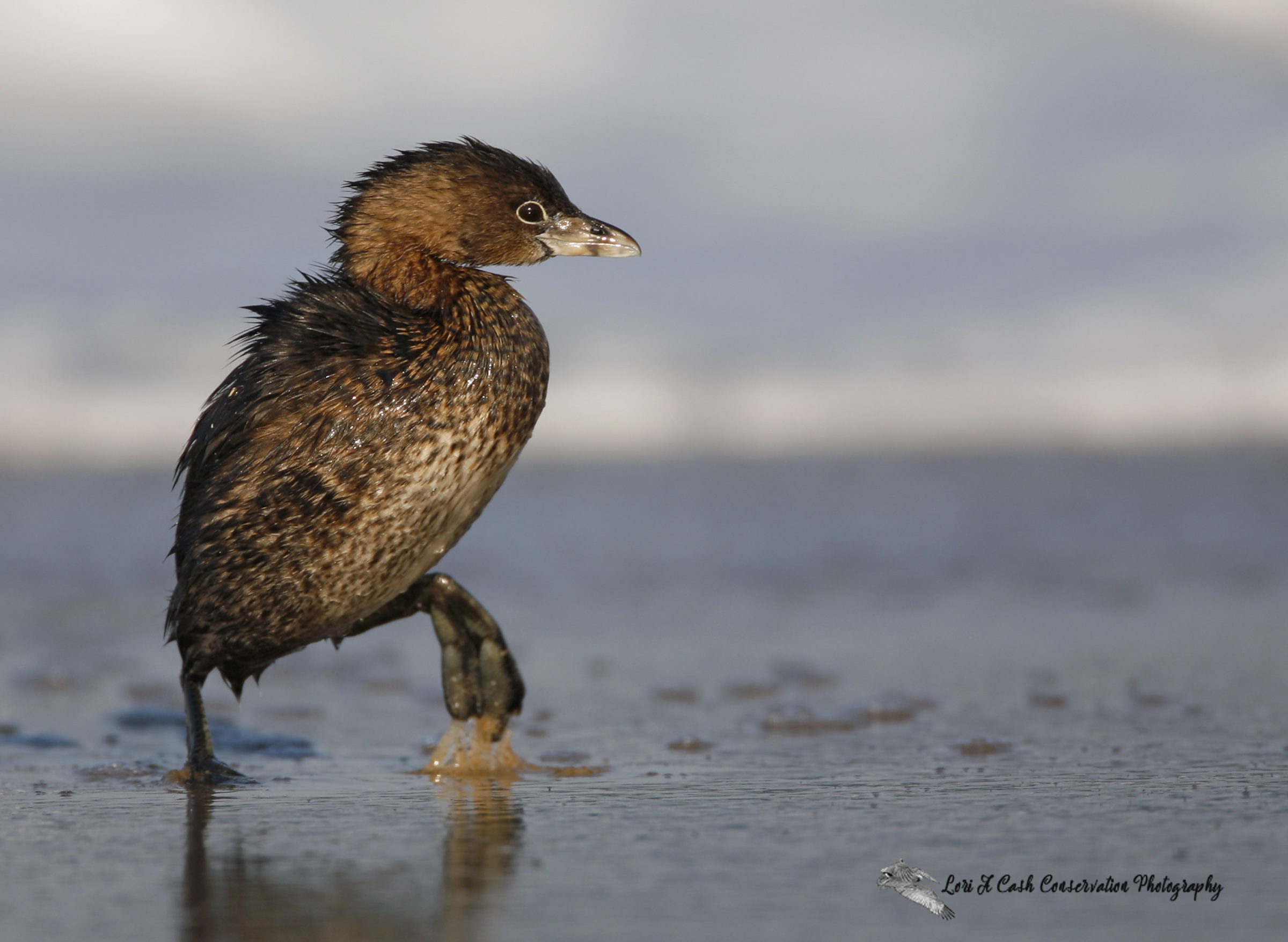 Afternoon At The Beach With A Pied-Billed Grebe

Story and photos by Lori A Cash

Spring Afternoon at the Beach

It was a late afternoon on a spring day, when I ventured out to the beach in Nags Head on the Outer Banks of North Carolina. My intention was to go to the beach to see what shorebirds were on the beach and to do some shorebird photography using my ground pod.

However, as I got to the beach and scanned the beach, I noticed there was a lone pied-billed grebe sitting on the beach in the sand.  I approached within a reasonable distance and got down on the ground my camera and 500mm lens attached to my ground pod.

My first thought to myself was “is this grebe injured”? I looked for signs that it may be injured because for the longest time it just sat on the beach and did not move to much. I cautiously watched this grebe while snapping an occasional photograph, but I was concerned that the grebe was injured. I was going over in my head what or who to call about a possible injured pied-billed grebe on the beach when suddenly the pied-billed grebe started to stir and move around. Of course, I started taking a few images at this time I saw the grebe making some movements. Then this next thing happen that totally stunned me.

Pied-billed grebes are not known for walking as they are expert diving birds and are almost always seen in the water. They have a small chunky body with legs that sit far back underneath the grebe’s rear end. Their toes are lobed which help makes them such great swimmers but not great walkers. The positioning of their legs causes the pied-billed grebe to walk awkwardly while on land.

The Pied-billed Grebe, An Unusual Behavior

I continued to document this behavior of the pied-billed grebe while I was lying on the ground getting a very low perspective. As the grebe moved further away from me, I would crawl and drag myself down the beach to keep the grebe in the focal range of my 500mm lens.

I never got too close to disturb or harm the pied-billed grebe. There were a few beach-goers on the beach that afternoon, and they all stayed a proper distance as well from this grebe. But this grebe was drawing a lot of attention from folks on the beach.

My afternoon with the Pied-Billed Grebe Comes to An End

After photographing and observing this grebe on the beach for several hours, I had to make the decision to leave and to gather my photo equipment and head home. When I left the beach, this pied-billed grebe remained sitting on the beach. I was sad to have to leave as I wanted to know what was going to happen to this grebe, wondering if the grebe would find its way back to its natural habitats of wetland and marshes, and too, just as I did not know how this pied-billed grebe ended up on the beach in the first place. I do not know what happened to this grebe after I left the beach that spring afternoon.  However, I do know that I loved my afternoon with this pied-billed grebe and have been very thankful to have witness such a remarkable behavior that is not normally seen, especially in such a very peculiar habitat setting.

I learned a lot on this afternoon with this one pied-billed grebe that was at an Atlantic Ocean beach, a rare sighting in this location for a pied-billed grebe. I learned to always be ready for the unexpected with wildlife photography and to document any unusual or usual behavior displayed by my wildlife subjects. I truly enjoyed my experience observing and photographing this beautiful pied-billed grebe.